A rivulet called Buivyda trickles down a forested highland close to the Lithuanian-Belarus border. It gave its name to a village located nearby a large bend of the biggest river in Vilnius region, which winds its way over a hilly landscape. The river bend also carries the name of Buivydžiai, and it is protected as a hydrographic reserve.

Buivydžiai is the largest settlement of the area and the centre of the parish. It has had its own coat of arms since 2012, which carries a rampant deer on it to symbolise the rich and abundant forests of the region. The red colour in the coat of arms reminds us of love, courage and valour of the locals in their fight for independence and freedom of belief. A symbolic cross of Saint George epitomises the devotion of the local community as well as the church of the Saint.

St. George’s church and St. Florian’s chapel in the churchyard are two adornments of the village of Buivydžiai. A bright brick church of a regular octagonal shape fascinates by its exclusive architecture. Its central dome and the porch with columns and sculptures of saints lend an air of solemnity to the church. St. Florian’s chapel, formerly carrying the name of St. Michael the Archangel, is situated in the churchyard. The chapel architecture reminds us of a high, but not large quadrangle pyramid. This special ensemble of the two structures is recognised as cultural heritage and is protected by the state.

The construction of the wooden St. George’s church and St. Florian’s chapel was funded by Michal Radziszewski at the end of the 18thcentury. He was the Marshal of Vilnius, who had married the daughter of the landlord family of Buivydžiai. He rebuilt the chapel that had been constructed near his elaborate brick manor by the monks a century previously and which was considerably neglected at the time. St. George’s parish was established at the same time.

Visitors also admire St. Ignatius chapel of St. George’s parish located in the nearby village of Pričiūnai. This small chapel is famous for its yearly celebrations of the saint’s feast day at the end of July attended by numerous believers from all corners of the country. The chapel honours a nun of the congregation of the Sisters of Angels, the stigmatist Vanda Boniševska. A yearly pilgrimage is organised from Buivydžiai to this chapel.

Exclusive sites of archaeological importance can be visited in the vicinity of the village of Buivydžiai. Rėva hill fort is located on a hill on the left bank of the River Neris in a mixed-tree forest. The hill fort was inhabited at the end of the Istcentury. The Pašulniškiai hill fort of the same historic period has clearly visible mounds, ditches and a square. It is worth visiting the hill forts of Pakalniai, Papunžė, Santaka and Pilviškiai dating back to the 3rdand 4thcenturies AD.

St. George, the son of Christian noblemen of Cappadocia, was a courageous soldier who was tortured to death in Palestine for refusing to recant his Christian faith. He is believed to have rescued a princess who had been captured by a dragon, so he is depicted in arts as a warrior on horseback slaying the dragon with his spear. St. George is the patron of Catalonia, Georgia (Sakartvelo), Portugal, Venice and other states and cities. He also is proclaimed the second protector of Lithuania (the first, obviously, is St. Casimir). The Saint is also the protector of horses and other animals against all diseases.

St. George’s Day is celebrated on 23 April, and it is related to the beginning of the summer season. It is said that the day unlocks and awakens the soil providing refreshing dew for the grass to grow. It is not recommended to work in the fields with horses on that day as St. George’s Day is also a holiday for them.

At the location of the present-day St. George’s Church, Mikališkiai Regular Canons of Penitence erected a wooden chapel at the end of the 17thcentury. In time, it fell into ruins and its roof started leaking. The Marshal of Vilnius, Michal Radziszewski,who had married a noble girl from Buivydžiai village, built there a splendid manor for himself. He also started the construction of a new wooden church to replace the old chapel. At the same time, a new chapel was built to serve as a family mausoleum. Count Konstantin Tyszkiewicz visited the church and noticed in his descriptions of his tours that the mode of construction used there had never been seen before.

The wooden 18th-century church was destroyed by fire quite recently (in 1982). Funding from the devout local community helped construct a new brick St. George’s church in just a few years. It is interesting that the new brick church it is almost an exact copy of the old church.

The church is octangular in shape with a dome and a porch. It is admired by visitors due to its architectural gracefulness. It is decorated with an oil painting of St. George, 19th-century sculptures of St. Casimir and St. Stanislaus as well as other pieces of sacral art.

A sharp-pointed, high pyramid-shaped chapel is situated in the churchyard of St. George’s church. The top of the chapel is decorated with the figure of a trumpet-blowing angel. The chapel of unusual architecture was founded by M. Radziszewski and was meant as a family mausoleum, which contained family coffins in those days.

Initially, the chapel was given the name of Archangel Michael, most probably because of its builder, Michal Radziszewski’s first name. Later, in around 1820, it was consecrated in honour of St. Florian as it kept the reliquary of the Saint received from Pope Pius VI.

St. Florian was a Roman soldier who converted to Christianity and was tortured to death for that in about 304 AD. He became famous for miraculously extinguishing a fire-engulfed house with a single bucket of water. He is usually depicted with a bucket of water in one hand and is considered the protector from fires and natural disasters. St. Florian’s Day is celebrated on 4 May and is the official professional day of firefighters and rescuers. 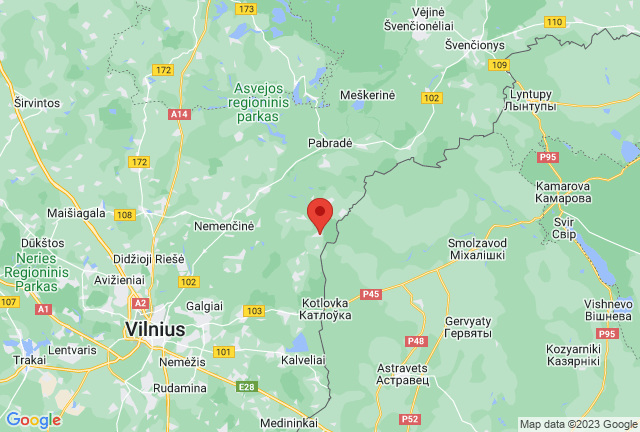