The first hill forts were built by the Balts in 2000 B.C. It is estimated that today there are nearly 1,000 hill forts in Lithuania and more of these special natural and human creations are discovered every year in dense forests. It is curious to note that no other country in Europe has more hill forts than Lithuania!

The hill fort is an important Lithuanian ancient defensive complex. Back in those days they comprised a very dense defensive complex. Today there are 10 hill forts in Neris Regional Park from different eras; the park is known for its magical splendour of nature and abundance of cultural heritage objects: Naujosios Rėvos, Buivydų, Karmazinų, Stirnių and others. All of them are nestled along the banks of the River Neris and smaller streams of the regional park.

A hill fort on the left bank of the River Dūkšta, not far from Bradeliškės village, is worthy of special attention.

This was thought to be the earliest place inhabited by people and started being used for defensive purposes in 2500 B.C. According to scientists, local people were hiding here from enemies up until the 14thcentury.

As time passed, Bradeliškės Hill Fort changed considerably. In 2017, with the help of specialists from different areas of expertise, an informational display was created, and visitors now have an excellent opportunity to view the hill fort the way it looked several centuries ago. This three-dimensional stand shows us the once great, but now extinct steep embankments of the hill fort, the hill's fortifications, and the River Dūkšta that followed a different route back then.

Additionally, there are two more hill forts close by that intrigue travellers – Buivydai and Karmazinai. The former is noted for its steep embankments and the latter serves as a place for ceremonial fires to this day.

Bradeliškės Hill Fort, the pride of Neris Regional Park fascinates with its greatness and reveals ancient history. Many centuries ago there stood a wooden castle that was protected by natural obstacles (the River Dūkšta that is spread out) and defensive measures implemented in addition: ramparts and ditches. This hill fort was one of two very important defensive points between two Lithuanian capitals, Kernavė and Vilnius.

Today, Bradeliškės Hill Fort is maintained and adapted for the convenience of visitors. Even though it is impossible to visit the fortifications that once stood on top and the view itself has changed significantly through the centuries, the display at the foot of the hill nevertheless masterfully recreates the view of the past: one can imagine towers of an ancient castle, unconquerable hillsides and exclusive elements of a defensive complex. We can see for ourselves how drastically different today's scenery is: a large part of the hill has slid down to the brook that runs along the foot of the hill, the defensive rampart suffered erosion and wooden fortifications that stood on the upper platform have disappeared altogether.

Everyone who visits Bradeliškės Hill Fort can learn about history, but that is not all. Wooden stairs lead to the very top of the 16-metre high hill fort. There is one interesting detail about the hill fort – the hill's surface area equals that of a football pitch and spans more than 110 metres and is 60 metres wide! Once on top, visitors have their breath taken away by the magnificent views of the Dūkšta landscape rather than the fatigue of climbing up. Autumn is an especially picturesque period of the year for this is the time when the many forests of the valley burst out in many colours.

Buivydai Hill Fort stands less than half a kilometre from Bradeliškės, also on the left bank of the River Dūkšta. It is known for its steep 40-metre high embankments. Today there is an observation deck in place of the former castle platform which serves as an open vista to the impressive view of the Dūkšta valley.

Buivydai Hill Fort is sometimes called the most curious mystery in Neris Regional Park. Due to the lack of archaeological findings it is not possible to confirm that the site was the site of a small ancient castle. This very secure area could have served defensive purposes perfectly for one side of the hill fort borders the River Dūkšta and a ditch which is fed with waters from the brook and snow runs along the other. On the side free from natural obstacles Lithuanians once built an elaborate defensive system that consisted of three ditches and three ramparts.

The strange small, pyramid-like Karmazinai Hill Fort stands in the spectacular vicinity of the junction of the Neris and Dūkšta. According to archaeologists it is about 2000 years old which, as time passed, lost its defensive capabilities and became a sacrifice hill. A sacrifice hill was an ancient sacred place, where pagan Lithuanians held ceremonies to honour their gods. Today there is an altar on top of the hill fort and bonfires are lit on special occasions; wedding and other ceremonies are also held here as well.

Karmazinai Hill Fort, also called Viršupis Sacrifice hill, is entwined in many legends. It is said there once stood a stone idol and the hill itself was surrounded by two circles of 18 mighty large oak trees. Another legend tells us a church was built here, but suddenly disappeared. That explains the bells that ring at midday coming from deep down in the earth. 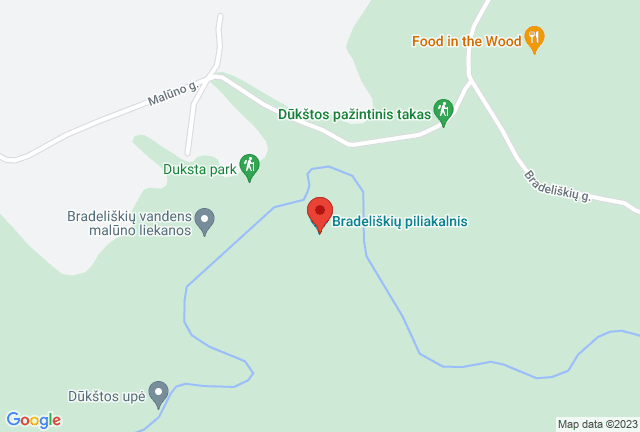