The roadsite pole with a statue of St. John of Nepomuk is one of the most important highlights of the town of Trakai. This roadsite pole is 14 metres in height and it is located at the heart of Trakai, i. e. at the crossing of two main streets, Karaimų and Vytauto, in the centre of the former Townhall square. Written sources testify that a brick column was there as early as the middle of the 17thcentury.

A roadsite pole of a classical style with the statue of the patron of fishermen and water-encircled cities is an important and much adored symbol for the residents of Trakai region. After the uprising of 1863, the tsarist government ordered that the saint‘s sculpture be removed and offered a substantial remuneration for the job. The local residents are said to have resisted the order and refused to comply. However, a rogue grabbed a knife and was ready to destroy the sculpture, but he fell off the ladder and broke his leg.  Trakai chief of police had to invite the Cossacks to tear down the sculpture of the Saint.

In 1935, a new sculpture of St. John of Nepomuk was installed on the roadsite pole. It was created by Vilnius sculptor,Stanislaw Horn–Poplawski. The statue was threatened again in the post-war years. Finally, diligent atheists took the wooden Nepomuk off the roadsite pole and threw it into the lake! When the employees of Trakai museum found out about this, they found the sculpture deep in the lake’s waters, brought it to the surface and stored it safely in the museum storage facility. Four clocks were installed on the pillar as replacements for the statue, but they broke down shortly after: they all showed different time.

Today, we can see a restored sculpture of St. John of Nepomuk on the roadsite pole. The statue of the patron of Trakai was proudly returned to its original location in 1990.

Many legends are told about the roadsite pole of St. John of Nepomuk. One of them says that in the 18thcentury, when the owner of Užutrakis Manor, Laurynas Odinec, was sailing on the lake, there was a sudden storm and the boat started sinking. The landlord recalled St. Nepomuk and started praying to him wholeheartedly asking for support. The storm calmed down then as quickly as it had started. Odinec was saved, and he was very grateful to the Saint for his narrow escape. To express his gratitude, he erected the sculpture of the Saint in the middle of the Market Square.

Another story tells about the grief of the local residents when the tsarist government took the statue off the roadsite pole. The people started to believe that each spring the waters of Lake Galvė would claim one human life if St. Nepomuk was not returned back to the pillar. In time, the story was somewhat modified: it was said that the lake was ice-free in winter and the ice did not melt in spring unless the lake received its victim.

Life of St. John of Nepomuk

John of Nepomuk was born around 1340 in Czechia, close to the small town of Pomuk (today’s Nepomuk) near Prague. When he grew up, he studied theology and Canon law at the universities of Prague and Padova.

When he turned 40, Nepomuk was ordained a priest and was later appointed to serve as a Canon of St. Vitus Cathedral in Prague, a member of the Capitula. Joan, wife of Czech King Waclaw IV of Luxemburg, used to confess her sins only to this priest. The story goes that King Waclaw, being suspicious about his wife‘s fidelity, tried to make Nepomuk reveal the secret of the confession. The priest, however, did not obey the King and fell into disgrace.

Soon, a debate erupted in the Kingdom about the influence of the Church on the State. John of Nepomuk defended the seniority of the Archbishop of Prague, Jan Jenshtein, against King, Waclaw the IV, which angered the King more than ever. The King ordered the arrest of the priest, his interrogation, torture and murder. He is believed to have been dropped with his hands tied from the arched Charles bridge into the Vltava River on 19 March 1393. That is why Nepomuk is believed to be the patron of bridges and the guardian against water-related calamities.

Later, people started to worship him as a martyr, the defender of the seal of the confession. In 1721, Pope Innocent XIII declared John Nepomuk as Blessed, and in 1729, Pope Benedict XIII canonised him, i. e. proclaimed him a saint.

It was the Jesuits who brought the cult of St. John of Nepomuk from Czechia to the Lithuanian-Polish Commonwealth of the 18thcentury. Soon, the name became one of the best-known and most revered. Notably, the then ruler Augustus II selected St. John of Nepomuk to be the patron, i. e. the guardian and the paraclete, of the state alongside St. Stanislaw and St. Casimir. The Brotherhood carrying his name was established in Vilnius, and several churches were named after him. Utena area is known not only for its numerous lakes, but also for the number of roadsite poles with his statue. The saint is often called by his diminutive name Jonelis by locals.

The Day of St. John of Nepomuk is on 16 May. He is considered the patron of all Czechs, priests, river sailors, rafters and bridges, the protector from floods and all water-related calamities. St. Nepomuk is believed to be the saviour of the drowning man, of the unfairly accused and convicts. In1935, he was proclaimed the patron of the town of Trakai.

St. Nepomuk is usually depicted in paintings wearing a white surplice or a rochet, i. e. a white, knee-length ecclesiastical vestmentworn by Roman Catholic prelates, bishops and canons. He often holds a book, a crucifix or a palm branch in his hand, which is a Christian symbol of martyrdom, victory of the soul over the body, or heaven. Another exclusive attribute of St. John of Nepomuk in visual arts is the nimbus with five little stars. The sign is a reminder of the legend telling that when the Saint was dropped into the waters of the Vltava, the stars started twinkling in the river. 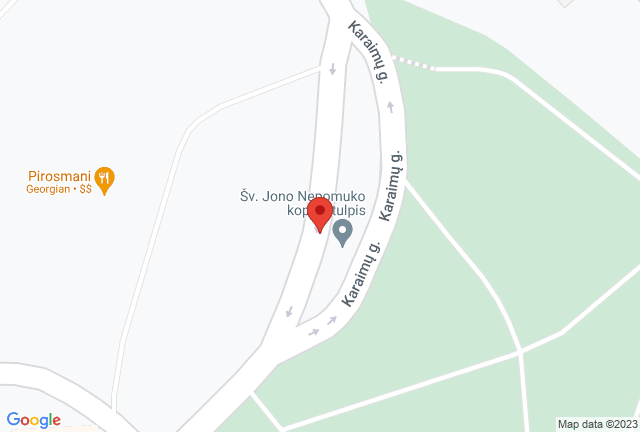