...Once upon a time Grand Duke Gediminas of Lithuania, who lived in his native Kernavė at the time, set out to hunt in woods on the other side of the River Neris. He saw a beautiful hill in the plains surrounded by oak trees. The duke was mesmerised by the magnificent place and decided to build a castle here. This is how a castle came to be built at the beginning of the 14th century and a new town, which we now call Senieji Trakai, quickly began to form around it. Gediminas made it Lithuania's capital, even though this lasted for just a short time.

It is worth knowing that Trakai derives its name from the word ‘trakas’ (track), meaning ‘a raised place in the forest’. The old forest and woods have disappeared, but the memory of the old landscape has remained engrossed in the name of the area.

Today's archaeologists tell us that these surrounding areas were inhabited a very long time ago. There is some proof that close to a small lake (now marsh) a large settlement was functioning in the first millennia BC. In an effort to preserve the area, Senieji Trakai was given the status of an archaeological preserve. Excavations unearthed some interesting artefacts from various periods: animal remains, knives, keys, tips of crossbow arrows and others. Archaeologists even found small scissors. It is speculated that these were the ones used by Birutė, the legendary wife of Duke Kęstutis, mother of Grand Duke Vytautas!

During the wars with the Teutonic Order the number of castles in the Grand Duchy of Lithuania increased. One of Lithuania's oldest masonry castles, Senieji Trakai Castle, was very conveniently situated in a strategic area. A castle built on a small hill fort was surrounded by a trench full of water. Written sources of the 16thcentury reveal a curious detail that the castle was accessible only by boat. Even much later (19th century) maps of the castle sites showed the existence of a drawbridge.

Senieji Trakai Castle is the birthplace of Grand Duke Vytautas. According to chronicles, the year 1350 marked the birth of one of the most prominent future Lithuanian historical personalities who was born into the family of Duke Kęstutis and Priestess Birutė. At the time when the highly esteemed Duke Vytautas was the ruler, Lithuania expanded from the Baltic sea to the Black sea!

When Vytautas relocated to the new castle in Naujieji Trakai, Benedictine monks were given responsibility for his native Senieji Trakai Castle. That is how one of the first monasteries in Lithuania was founded!

The castle site of Senieji Trakai is situated on a small hill and holds the status of a state-protected cultural monument. This castle as well as the Peninsula Castle were first mentioned in written sources in the 14th century and are considered enclosure type castles. It was surrounded by a trench up to 35-40 m wide and up to 8 m deep and protected by a 10-m high defensive wall.

Beginning in 1316 Senieji Trakai served as the capital of the Grand Duchy of Lithuania for seven years. After the prophetic dream of Duke Gediminas about an iron wolf and when Vilnius became the new capital, this place served as the capital of Trakai duchy and the Samogitian elderate. Lithuanian sub-monarchs made the castle their residence and took on the responsibility of protecting and defending Lithuania's western borders.

When the country was fighting with the Teutonic Order, Senieji Trakai Castle suffered numerous attacks and attempts to destroy it. A fatal battle occurred with the order in 1391 when the castle was almost completely destroyed and has never been rebuilt since. From then on, the defensive role of Senieji Trakai was diminished.

Invited to his native castle by Grand Duke Vytautas around 1410, monks from Tyneco (near Krakow) founded a monastery here. The duke built them a wooden church and allocated them a dessiatin (ed.Old Russian measurement) of land along with two lakes. The monastery operated until the mid-19thcentury when it was closed by the administration of the Russian empire.

Today the top of the old castle site is occupied by a monastery and neo-gothic style church ensemble rebuilt at the turn of the 18th and 19th centuries. Linden trees that are more than 100 years old adorn the slopes of the hill fort. Senieji Trakai street village is nestled around the old castle site and has the status of an architectural sanctuary.

History lovers are very familiar with the road leading towards Senieji Trakai. Commemorating the 570th anniversary of the death of the duke, Trakai Historical National Park Management decided to revive the symbolic Vytautas the Great road. The community of Senieji Trakai participated in this project. In the year 2000, the road was officially opened to the public – the Trakai–Senieji Trakai route included nine stops, nine wayside shrines that symbolise important events and achievements in the life of Vytautas the Great. Road maps of Vytautas the Great Road showing the exact places for every shrine cross can be found at the tourist information centre and on the internet.

Travellers first encounter a roadsite pole dedicated to Saint Jurgis built at the earliest, in 1998. This sculpture stands on a small hill with a beautiful vista to Trakai Island Castle, Trakai Basilica, and reflects the Great Duke's militant character, the fierceness of his battles and victories. The place marks the beginning of the road to the historical capital of Lithuania – Senieji Trakai. Saint Casimir's wayside shrine tells the story of Vytautas the Great as a builder of castles and churches. And the arrival of Benedictine monks to Senieji Trakai is commemorated with the wayside shrine of Saint Benedict.

A couple riding on a horse symbolises ‘The escape to Egypt’ and serves to remind about the arrival of Karaites in Lithuania. The woman holds a basket with cucumbers and tells us that it was the Karaites who introduced cucumber and how to grow it into Lithuania. The historical princess of Egypt, Saint Catherine of Alexandria, the patron saint of students reminds us about Vytautas’ campaign to send youth to study in western Europe and the first Lithuanian student at Krakow University was Mykolas who came from Senieji Trakai!

Near the entrance of Senieji Trakai stands a sculpture honouring the duke's parents Kęstutis and Birutė. They hold a crown from Vytautas which never reached them. ‘A Suffering Pieta’ recalls a painful time when Kęstutis was killed in Krėva castle. This roadsite pole is held in special esteem by locals– they maintain a beautiful flower bed around it and frequently pray here. There is a sculpture of Blessed Virgin Mary with Baby Jesus in the old castle place which symbolises the purity of motherhood and love of the homeland.

Finally, the last wooden sculpture built depicts a sitting Duke Vytautas with a sword in one hand and Lithuania's statehood symbol Vytis – in another. 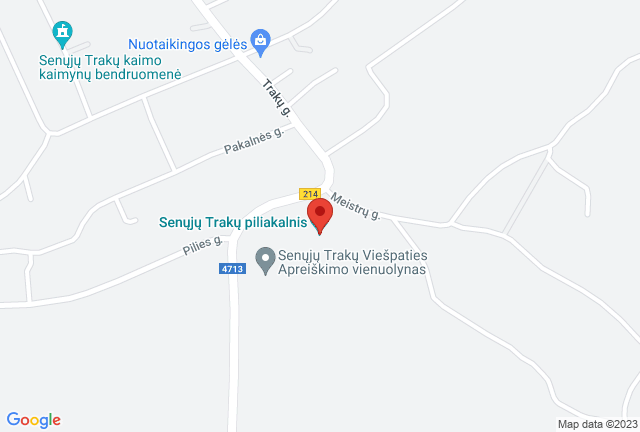