Liubavas Manor is one of the oldest manors in Lithuania. It was first mentioned in the Treasury Book of Sigismund II Augustus, Grand Duke of Lithuania and King of Poland. The source testifies to the repairs to the fishery ponds on the manor territory at the time. The manor was once so advanced economically that it supplied its local produce to the Royal Manor in Vilnius.

The manor enjoyed an especially rich abundance of natural resources. It owned many lakes and ponds in the Molėtai District that were stocked with fish as well as several hundred hectares of the Lavoriškės-Nemenčinė forest. The latter is known as the sixth biggest forest in Lithuania. It has a large stock of timber and plentiful wildlife. The forest was a hunting place for moose and roe. The forest is full of berries and mushrooms (especially boletus). Interestingly, the manor’s staff enjoyed free access to pick berries and mushrooms while outsiders had to obtain a special permit issued by the Liubavas forester.

Back in the day, the manor used to be one of the centres of the neighbouring lands (local municipalities). Up until the middle of the 20thcentury, before it was nationalised by the Soviet government, the Manor belonged to various prominent people who left an important mark in Lithuania’s history. The manor was famous for its talented and caring owners including such renowned Lithuanian artists and cultural figures as Mikolaj Tyszkiewicz, who was a famous Vilnius Cathedral canon and funded a private orchestra in the manor!

Currently, the Liubavas Manor Museum invites guests to learn more about its history, aspects of its former manufacturing operations and the special technologies used there. It offers a unique chance to have a closer look at its watermill, which was an important development that revolutionised many aspects of day-to-day life. For centuries it was used to produce bread flour. Over ten different production methods are on display at the museum, and they include wood and metal processing, wool making and even electricity generation.

Undoubtedly, Liubavas Manor is a unique example of architectural, landscape and technical heritage. It is the only manor in Lithuania where its technological equipment has been completely restored. Even the museum’s century-old hydro turbine works perfectly well. In 2012, the prestigious Europa Nostra award marked Liubavas Manor’s significance. This independent organisation recognised the Museum for the outstanding quality of its restoration work and acknowledged it as one of the best examples of conservation of cultural heritage.

Liubavas Manor is easy to reach as it is located in close proximity to the Park of Europe. On the Vilnius road, you follow the road to Molėtai, take a right turn at the 21-km mark to Nemenčinė, and then follow the road signs closely. The Museum is open between April and October, and visitors are advised to phone before their visit. During the cold season, group visits can be arranged with advance notice.

There is a mystery about the origins of the manor’s name. It is believed to have been derived from the Old Prussian words Lubowo, Lubow, Liubow or Lubów,which mean ‘love’ and ‘marriage’ in Lithuanian. It is said that at that time, when the Prussian community was escaping from the conquerors, it moved into the depths of Lithuania and settled in the valley of the Gerėja (today Žalesa) River.

Liubavas Manor House is harmoniously incorporated into the picturesque landscape of the banks of the Žalesa River. The estate is comprised of 20 different buildings and a system of seven ponds. It used to have a functioning brewery and an ice-cream parlour. On Wednesdays, people from the neighbouring villages would come to the watermill to watch films. It is worth noting that the Liubavas Watermill generator produced enough energy for the village even before universal electrification.

The surviving constructions include a stone watermill, an 18th-century servants’ quarters and a conservatory where frost-sensitive plants were kept in colder weather. Seven more buildings have survived until today, while the remaining fragments of walls and foundations serve as evidence of other buildings, too. Visitors are invited to take a closer look at the Watermill Museum as well as the officine and the conservatory.

At the end of the 15thcentury, Count Albertas Goštautas, an important political figure in the Grand Duchy of Lithuania and the author of the First Lithuanian Statute, was the owner of Liubavas Manor. The history of the estate owners, which spans almost five centuries, is quite complicated. They changed quite often either through inheritance or marriage. At different stages the manor belonged to the Goštautai, Tyzenhauses, Tyszkiewiczes, Golejievskis, Slizieńs and even the Radziwiłł families. Among the most famous owners of the estate we should mention Barbara Radziwiłł (Barbora Radvilaitė) and the talented 19-th century sculptor and medallist Rafał Slizień.

Liubavas Manor Watermill Museum was built on the Žalesa River in the 16thcentury and has been rebuilt several times since. The building was constructed using exceptional quality bricks, and it was successfully restored and brought back to life. In 2011, the Liubavas Manor Museum was established on the watermill premises.

The mill can be compared to a factory that requires knowledge of various fields for its management: nature science, hydrosystem requirements, mechanics, know-how in milling technologies and accountancy.

Liubavas Manor Museum was opened with support from Gintaras Karosas. It is a unique object of technical, historical and cultural heritage that illustrates technological aspects of the mill’s centuries-long operations. In order to facilitate this, the mill’s technical equipment was carefully renovated. Even the smallest authentic details and old materials were successfully preserved. One year after its restoration, the Europa Nostra organisation declared the museum a prime example in the conservation of European cultural heritage. 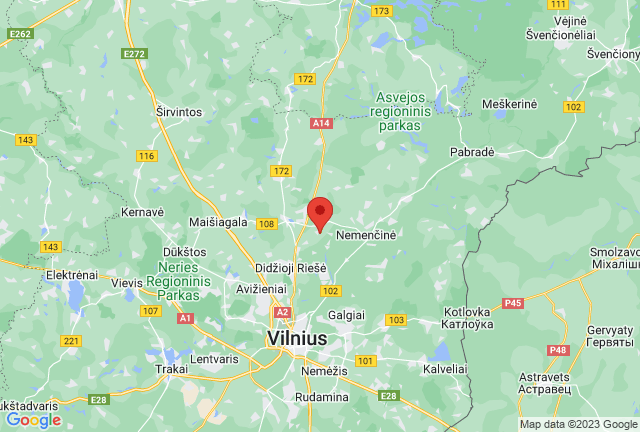