Užutrakis Manor House is one of the most prominent and best-preserved mansions in Lithuania. The restored manor and park ensemble on the shore of Lake Galvė will allow you to experience how the Lithuanian nobility lived in the 19thcentury.

Count Józef Tyszkiewicz and his wife Jadwiga founded the Užutrakis Manor Estate at the beginning of the 20thcentury. The Count was inspired by the unique landscape of Trakai, and the manor made the most of the area’s potential.

The Palace, decorated with impressive Louis XVI style interiors, was created by Polish architect Józef Huss. It was complete with a terrace, crowned with open pavilions, offering a fabulous view of Trakai Castle. The park was designed by Édouard FrançoisAndré, a famous French landscape architect. He created a mixed style park decorated with copies of antique sculptures and a large number of plants. The park still contains nearly 100 different kinds and forms of trees and shrubs, more than half of which were individually transported here to complete the park.

Today, the estate is accessible by road, but the Count’s family did not use it. It was only used for agricultural purposes and was known as ‘the Potato Road’. The nobles used to reach the peninsula by a ferry raft, crossing the isthmus between Lakes Galvė and Skaistis, and the rafter lived nearby. The Tyszkiewiczes hosted numerous receptions, family reunions or friendly parties, but even then, their guests did not use the road either. The events were characterised by loud music, the tables were laden with French cheeses produced on the estate and the drinks were from the local distillery. More often than not, there was a locally grown roast pheasant in the middle of the table!

The Užutrakis Manor House belonged to the Count Tyszkiewicz family before World War II. During the Soviet occupation, the manor was nationalised and turned into a sanatorium, later it served as a pioneer camp, and then it became a tourist base. The manor was severely damaged: the original design of the Manor was destroyed, and the park was completely abandoned.

Today, Užutrakis Manor House is coming back to life. The manor is being restored and the park is being rebuilt. Concerts and exhibitions are often held here, and the Užutrakis Manor ensemble is now one of the most visited places in the region.

The peninsula between Lake Galvė and Lake Skaistis was first mentioned in historical sources in the 14thcentury. In those days, it was called ‘Algirdas Island’ and belonged to the Tatar nobility. In the second half of the 19thcentury, the peninsula was acquired by Count Józef Tyszkiewicz (1835–1891).

The Manor Estate, which survived to the present day, was founded by his son, also called Józef (1868-1917), and his wife, Polish duchess Hedwig Światopełk-Czetwertyńska. The palace was built, and the park was created between 1896 and 1902.

During World War I, when the German army was approaching, Józef Tyszkiewicz and his family left the manor and moved to St. Petersburg. Before the beginning of World War II, the Manor was managed by the Count’s eldest son, Andrzej.

During the war, the German army occupied the Manor, and after the war it was nationalised by the Soviet government.

French landscape architect Édouard André arrived at Užutrakis in 1898. Here he developed an 80-hectare mixed style park in his characteristic style. In front of the palace, he designed parterres of regular shape with trimmed lime alleys, ornamental flower gardens, marble vases and sculptures.

The architect skilfully exploited the contrasting landscape of the peninsula, highlighting its hills with compositions of artificial rocks, and strengthening the glow of the surrounding lakes with a complex system of ponds. More than 20 ponds were artificially dug, which interlinked with each other and the lakes, thus creating a unique park full of water reflections, where the boundaries between the land and water would disappear.

The manor of the estate was not only luxurious, but it also allowed everyone to admire the spectacular scenery. In the second half of the 20th century, the palace was abandoned, but today it is being gradually restored.

In 2008, the exterior, the first floor, the attic, the lobby and the staircases of the palace were refurbished. In 2010, the first restored chamber of the manor was opened to the public. It was a representative dining room decorated in the style of Louis XVI. At the same time, the original design of the entire ground floor was restored, as was the delicate wall moulding. In the same year, the restoration of the Tapestries Chamber was also completed.

A great number of local and imported plants can be found in Užutrakis Manor Park. They include 38 species of indigenous Lithuanian trees, 54 species of imported trees and shrubs, and 400 species and forms of herbaceous plants. Many of these plants were planted by Édouard André.

The Park is home to seven species of bats, a number of squirrels and roe deer. The ponds and their surrounding areas create a habitat for rare species of frogs, smooth newts, the great crested newts and otters. The old trees in the park are frequented by woodpeckers, black woodpeckers and owls. Areas surrounding the Park shelter the nests of goshawks and marsh harriers; the roof of the palace is cherished by mergansers, while the ponds provide food for herons and common terns.

From the day of its foundation, the estate was decorated with many sculptures which included copies of works by Antoine Coysevox, a famous 18thcentury French sculptor. They would usually depict ancient gods and goddesses. Almost all of the sculptures were destroyed after World War II, but today attempts are being made to restore them and return them to the Park.

The park also features a sculpture of the ancient goddess Diana, modelled after the mother of King Louis XV of France, Marie-Adélaïde de Savoie. This sculpture, as well as the sculptures of Flora and Hamadryad, are copies of original pieces on display in the Louvre. The works also include a statue of Bacchus, various busts and a sculpture of the Virgin Mary located on the lake’s shore. The latter was the longest surviving sculpture of the Park.

This sculpture could still be seen by visitors in 1964. Later, it was thrown into the lake. In 1975, the damaged sculpture was found in Varnikai Village cemetery and moved to the church of Trakai parish. Today, there is a copy of the sculpture of the Virgin Mary in Užutrakis Park. 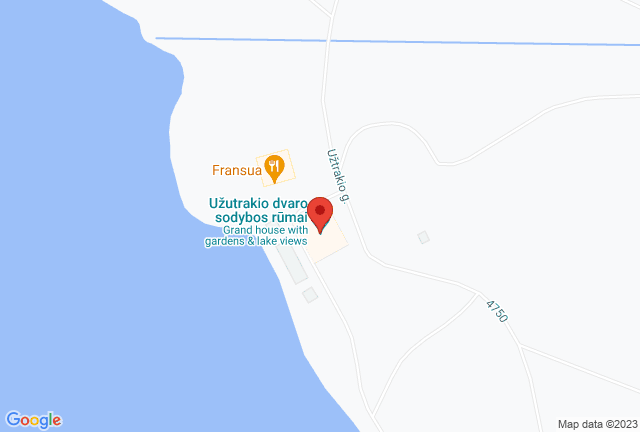