Historically Trakaitown is famous as a place where many national and religious communities get along harmoniously. This is reflected in the different and unique architectural traditions that collide here. Visitors to Trakai are invited to familiarise themselves with how peacefully Karaite, Tatar, Orthodox, and Catholic traditions coexist.

Karaites have the smallest number of peoples of Turkic decent living in Lithuania. Nearly 300 families of Karaites who call Vytautas the Great Vatat Bij, which means ‘King, destroyer of enemies’, were relocated to Trakai after the Crimea battle in the 14th  century. The first Karaites served as the Duke's bodyguards. They took up residence close to the castle on the northern side of the peninsula and which is now called the Karaite side or the Small Town.

A kenesa in the Karaite side is the oldest in Lithuania and one of the three oldest Karaite temples in the world still in use! You can also see here several archaic window facades, each with three windows, on the street side. According to legend Karaites used to build their houses dedicating one window to God, a second to Vytautas (the ruler), and the third one for the owner himself. In reality it was all about money – windows could only be installed after a tribute was paid to the duke. Therefore, less wealthy residents had one or two windows on the street side.

Karaimų Street claims to be the only place in the European Union that has an exposition dedicated to Karaite culture – Seraya Shapshalmuseum of the Karaite nation. Another building worthy of attention is the old Russian Empire postal building nearby.

The widest peninsula section was historically inhabited by Catholics and is also rich in architectural variety: different building sizes, shapes of the roofs and so on. One of the main accents of this part of the old town is an example of traditional Orthodox architecture – Orthodox Church of the Nativity of the Most Blessed Virgin Mary.

The western side of Trakai peninsula, called Dūdkalnis, was traditionally inhabited by Tatars. Several centuries back there were a wooden mosque and several living houses. Brave Tatar soldiers of Crimean Golden Horde descent served in the army of Duke Vytautas and guarded the southern entrance to the town.

The Karaite house of prayer is located in the northwestern part of Trakai old town. Karaite architectural and interior design features can be seen in this unique one-storey wooden structure. It consists of two spaces: main part (for men) and a balcony (for women) supported by four columns. As in other temples of Eastern religions women and men pray separately in the kenesa and everyone is required to wear a head covering.

The kenesa has an impressive blue dome shaped ceiling made with eight arches. Geometrical and plant components beautify the interior of the house of prayer. Interestingly, the altar is in the southern part and all burial ceremonies are held with the deceased person's head pointing southward.

The wooden Trakai kenesa was build back in the latter part of the 14th century and endured numerous wars and fires. Today you can see another Karaite temple in Vilnius, in the part of the city called Žvėrynas. Also, a commemorative stone marks the place of a kenesa that once stood in Panevėžys.

Lithuania's religious community of Karaites is one of nine state recognised traditional religious communities. The Karaite faith formed in 8th - century Mesopotamia (currently Iraq). The name derives from the word kara, which means ‘to read, to study Holy Scriptures’. The foundation of the Karaite faith is based on the Old Testament only without later additions and commentaries. The main principles of explaining and studying Holy Scripture are based on individual and independent interpretation without the guidance of any higher authority.

When the first Karaites arrived in Lithuania 600 years ago they were considered an elite group of Vytautas' army. Everyone who wanted to enter Trakai Castle had to pass through Karaimų street and afterwards the bridge thus protecting Vytautas from enemies and other ill-wishers.

Today about 60 Karaite people reside in Trakai and only a few of them speak their native tongue, which belongs to the Turkic group of languages.

Visitors to the museum, which opened in 1967, can learn about this exclusive nation's history, unique language and religion. It is the only place representing the Karaite culture in Lithuania.

The Museum’s exposition consists of more than 300 items. There are variety of expositions, including an Egyptian Karaite marital agreement and a collection of Eastern weapons. Pictures, handicrafts, clothing and accessories allow visitors to dig deeper into the history, everyday life, and customs of the Karaite nation.

Hajji Seraya Khan Shapshal– the famous 19th–20th century scientist, collector, widely recognised Karaite society activist, researched the cultures of Eastern nations and especially Karaite culture. In the Karaite congress held in 1927 he was elected Karaite community leader and was given the name hachan, the highest title for Karaite clergyman.

In 2011, the 50th anniversary of the death of Seraya Shapshal, the museum was named after him.

At the intersection of Karaimų and Kęstučio streets, near the former Turgus Square stands the deep blue coloured building of the old post office. It was built in the first half of the 19th century by Dominicans who resided in the nearby Peninsula Castle. The symmetrical one-storey log house with vertical boards nailed around was common to this period.

Nearly 50 years later the Dominican monastery was closed and the building they owned was converted into Trakai county police offices. Soon afterwards the Russian Empire post office began functioning in its place. Lastly, for nearly 100 years (up until 1960) it served as the Vilnius county post office and telegraph, was used to safeguard the archives, and to accommodate postal workers who lived in five of its rooms.

Currently the building belongs to Trakai Historical National Park Management. Interested visitors are welcomed to enjoy the old building from the outside.

Orthodox Church of the Nativity of the Most Blessed Virgin Mary

Following the 1831 uprising the number of Orthodox residents increased and the need for a new church became apparent. It was decided to build one in 1861. The construction was funded by residents themselves and Russian Empress Maria Alexandrovna who donated 6000 tsarist roubles. The construction was successfully finished by an engineer named Polozov who was awarded a golden ring with gemstones by the empress. Blessed in 1863 The Orthodox Church of the Nativity of the Most Blessed Virgin Mary was a traditional building in terms of form and structure.

Now this Orthodox church harmoniously integrates into the architectural mosaic of Trakai. It stands on one of the hills of the peninsula, at the intersection of Vytauto and Maironio streets. Anyone who wishes can admire not only the external architecture of the church, but also the vaulted and modestly decorated interior space. 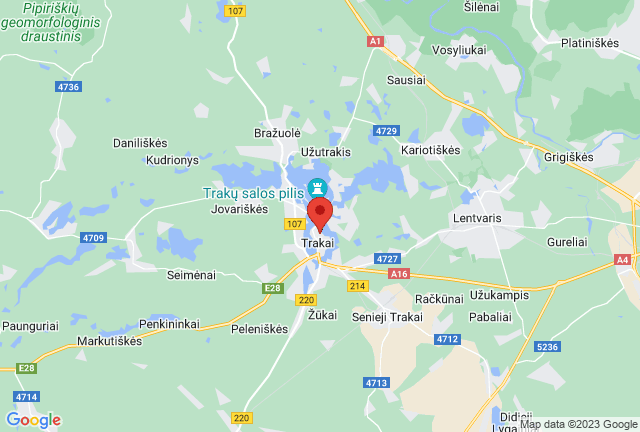