Trakai Basilica of the Visitation of the Blessed Virgin Mary

The Basilica of the Visitation of the Blessed Virgin Mary stands in Trakai peninsula surrounded by lakes. This church that equals Trakai Island Castle in terms of size and grandeur, was consecrated in 2017 as a basilica, a title given only to certain churches granted special privileges by the Pope.

The Basilica of the Visitation of the Blessed Virgin Mary, founded by Grand Duke Vytautas in the 15thcentury has an irregular shaped form with harmoniously intertwined gothic and baroque features. Opened fresco fragments in the walls of the church recall the Byzantine-era style that was used in Trakai Island Castle.

The Basilica is a treasure trove of sacred and fine art – there are easel paintings, memorial monuments, various relics, wine glasses, 18th-century candlesticks, a sanctuary lamp and more. A painting, depicting Mary, Mother of God is especially important since it is widely known for its miracles and graces. This first gold crowned painting officially blessed by Pope Clemence XI during the period of the Grand Duchy of Lithuania was given the title Protector of the Sick. Interestingly, the painting is revered by Catholic, Orthodox, and Muslim communities alike.

From1stSeptember 2017 to 8thSeptember 2018, Trakai Basilica celebrates the coronation of the Basilica’s famous painting; 2018 was declared the year of Trakai Mother of God, patron saint of Lithuania while the new Basilica’s bells, blessed in 2017, are a solemn reminder of the festive year.

Every year the Trakai temple is visited by many faithful not only from Lithuania. Special celebrations, such as the annual Žolinės (Feast of the Assumption) and Trakinės (Trakai Mother of God image coronation celebration), attract pilgrims from neighbouring countries and elsewhere. The festival faithful partake in a procession from the Gates of Dawn to the Trakai Basilica, a distance of nearly 30 kilometres.

Spiritual centre of Trakai, the Basilica of the Visitation of the Blessed Virgin Mary, has an exclusive history. It was never closed, never served another faith community nor was it used for any purposes other than religious.

This church is not only a unique monument of religious and Lithuanian cultural history. Special criteria of Domus Ecclesiae, a decree of Divine Worship and Liturgy, was used in the process of granting the very honourable title of basilica. The criteria are applied both for the building itself and the living Church – its flock of believers. The exclusive historical importance of the church for the region and the country were acknowledged, as was the solemnity of the building and religious community’s dissemination of faith and love.

The title of basilica also underlines the church’s special ties with the Pope, since Trakai Basilica has had the Mother of God Image in the main altar for 600 years and 300 years ago Pope Clemence XI bestowed the image with the crowns. It is also important to note that there is a monument of Pope John Paul II, consecrated in 2015, in the churchyard of Trakai Church of the Visitation of the Blessed Virgin Mary.

The title of Basilica also carries with it the obligation to lead other churches by an active social life, pastoral care, and organisation of liturgical ceremonies. Basilicas allow people to familiarise themselves with Papal documents and are visited by pilgrims and those who yearn for spiritual guidance.

Masses in the Basilica of the Visitation of the Blessed Virgin Mary are celebrated daily in Lithuanian and Polish.

The image of Blessed Virgin Mary with the Infant in her arms was widely known throughout the Grand Duchy of Lithuania well before it received recognition from the Pope. From the very beginning of the 17thcentury people began applying votes to the image, for example, small heart-shaped articles and chaplets made of precious metals, as thanks for graces received. It is estimated that today there are over 400 votes applied to ​the Mother of God image!

This original 15th-century painting with gothic features holds a special historical meaning. The underside of the image has an inscription denoting that it is a gift from the Byzantine Emperor Manuel II Palaiologos to the ruler of Lithuania Grand Duke Vytautas to commemorate his baptism. The same inscription also says it is Mother of God Nikopea, which in Greek language means ‘the victorious’. It is believed Nikopea helped the emperor to break the Persian siege and return to Constantinople at the beginning of the 12thcentury and this was the reason why Byzantine emperors made this Mother of God theirs and their capital’s patron saint.

The miraculous image in the main altar of Trakai Basilica was repainted several times throughout the centuries. After examination by restorers it became clear that an earlier image of Mary was in the gothic style, Blessed Virgin Mary was standing, without a scarf, and possibly with a crown of roses on her head. The image probably appeared to be too large for the new altar and therefore the lower part was cut off, the background was etched and painted gold anew, the figure of Mary was repainted in the Byzantine style, and a golden crown that once adorned the image itself, now hangs above the picture. The image of Mary with the Infant fascinates with its rims made of forged silver tin and golden wreaths gifted by the Pope. The finely etched golden background that dates back to the juncture of the 15thand 16thcenturies was shaved and also etched anew.

In 2017, the jubilee year, when the main altar of the Basilica was consecrated, new bells were solemnly blessed as well. They were cast in the famous foundry run by the Kruševski brothers in the Polish town of Węgrów. The main bell is dedicated to Trakai Mother of God, patron saint of Lithuania. It weighs an astounding 700 kilograms! The second one, a little bit smaller, marks the centenary of the restoration of Lithuania’s independence.

The period of 1stSeptember 2017 to 8thSeptember 2018 is a special year. The Trakai Basilica (which was given the title of Basilica by Pope Francis) marks the 300thanniversary since the image of the Mother of God was crowned. Moreover, it is one hundred years since the restoration of the State of Lithuania. The Lithuanian bishops and the Lithuanian Parliament declared 2018 the year of the Mother of God, patron saint of Lithuania. The new basilica bells solemnly proclaim the pronouncement.

The importance of the Trakai Mother of God image is unquestionable. There are number of sacred and cultural events held during the anniversary year of the coronation of her image: an international Mariology congress, lectures on specific topics, conferences, also a monthly event ‘A Prayer for the Town and the Motherland’ invites people to pray for peace and the welfare of people in Lithuania and the whole world. 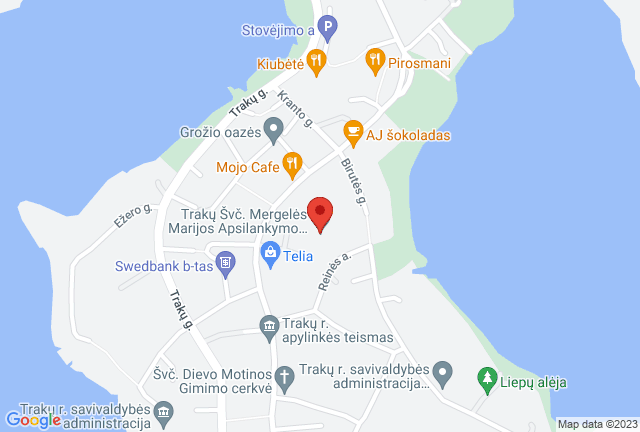