The Complex of Trakai Peninsula Castle and Other Structures

Trakai region is rich in its abundance of stunningly beautiful lakes and has been heralded for centuries because of its three castles. The first one, nearly four kilometers south of Trakai old town, is the old Trakai Castle – birthplace of Vytautas the Great built by Duke Gediminas. Naujieji Trakai Island Castle presents itself as a masterpiece of 15th-century defensive architecture of the Grand Duchy of Lithuania! At the time this castle along with Trakai Peninsula Castle stood as proof of Lithuania’s economic and military might.

It is worth noting that this Island Castle built in gothic style and surrounded by lakes is unique not only to Lithuania, but to Central and Eastern Europe as well! Meanwhile, the Peninsula Castle, much bigger in size, was one of the largest 15th-century enclosure castles of Lithuania. At the time it was not only bigger in size but more important in its role than the one built on the island.

As time went on, the role of Trakai Peninsula Castle changed. At the time an extremely important defensive castle became the place of residence of Lithuania’s grand dukes and their sons. At one time it served as a prison for high profile enemies of Lithuania, a Dominican monastery opened at the end of the 17th century, and the Russian empire made it a place for police and the court. Finally, the Gestapo operated from there during WWII and the KGB converted it to a prison after the war.

Today the restored Peninsula Castle belongs to Trakai historical museum and is open to the public. The exposition of sacred art opened in 2005 and has more than 200 unique exhibits that reveal the church of the time. Everyone who visits here will learn about the monstrance, chasuble, albarela, and so on.

Sacrifice Hill is the highest point on the peninsula, 1 of 1,000 hill forts in Lithuania. Full of deciduous trees, the 17-m high hill fort allows visitors to enjoy some of the most beautiful views – Trakai lake which surrounds the peninsula and the red gothic style Island Castle.

According to a legend, the name of the hill finds its roots in sacrificial pagan ceremonies that took place at the time. During mid-19th century excavations a perforated spoon was unearthed. According to Count Eustachy Tyszkiewicz its purpose was to scoop blood during ceremonial procedures dedicated to pagan gods.

An annual medieval celebration held in the peninsula territory is noted for its exclusive atmosphere. Ancient craftsmen, traders, knights, choral ensembles sometimes even witches – all of them together create an atmosphere where the curious visitor can get to know their craft and its intricacies.

The knowledge about Trakai Peninsula Castle comes from limited written sources. They tell us that the castle was constructed before the end of the 14th century. Also called the Main Castle, it was part of Trakai and Vilnius defensive complex system. Surrounded by Lakes Galvė and Luka (Bernardinai), the castle, fortified with masonry defensive walls, for a while was bigger in size and played a more important role than the Island Castle which is better known and more popular with today’s visitors.

The 15th century marked the decline in importance of the Main Castle. Castle lands were parceled away to the nobles and the castle itself became a prison for high-ranking state enemies and other convicts. The story tells that some time later city dwellers began taking apart the castle walls for the construction of their own houses.

Peninsula Castle stands as one of the largest enclosure castles in Lithuania. These types of castles had an inner courtyard surrounded by defensive walls with embrasures, towers, and gates. Such castles were usually constructed in hard to reach places, surrounded by water. Bodies of water, steep embankments, deep trenches were meant to prevent enemy soldiers from entering those castles.

The rise of the Middle Ages

Every year in mid-June a procession along Karaimų Street, the main street in Trakai old town, moves towards the Peninsula Castle. The Main castle then and the city itself comes alive during this celebration of the Middle Ages. The place fills with various craftsmen, traders, knights, traditional and street artists and countless guests. Sounds of traditional music and forge hammer blows, dance ensembles along with martial art performances recreate the magical atmosphere of the medieval city and its castle.

The area at the foot of Sacrifice hill is the place where many craftsmen present their handcrafted work using ancient techniques: shoemakers, jewelers, leather tanners, wood carvers and many others. Potters in workshops show how to make kitchen utensils in the stove, how to carve pots and dishes from linden tree bark. During the celebrations, visitors are offered an opportunity to produce a variety of products.

The highlight of the event is the battle of knights. Group battle tournaments and international archery competitions are also held. One cannot miss the dazzling and magical burning arrows show! Those brave enough are invited to try out their skill in axe throwing or archery.

The Peninsula Chapel was built in the territory of Trakai city, it then belonged to the Dominican monastery and now invites visitors to a sacred art exhibit. It contains close to 200 artefacts relating to church life. Among them are pieces of liturgical and church wardrobe, altar utensils, 18th century bells. The exhibit also has many representations of visual arts. A portrait of the Grand Duke of Lithuania stands out among the pictures and sculptures of saints.

The first Dominican monks arrived in Trakai in the 17th century. After they secured a piece of land in Trakai Peninsula Castle territory, they began the construction of a three nave two tower classical style church designed by Augustinas Kosakovskis and Martynas Knakfusas. Unfortunately, the construction wasn't finished. Much later, after theological doctor Liudvikas Glovickis became the prior of the monastery the church naves were rebuilt and in 1822 the chapel was consecrated and given the name of Saint Michael the Archangel. A year later a monastery with a sacristy, dining room, and a kitchen was opened. The monks also operated a school.

The former Dominican monastery was restored, and the sacred art exhibit was renewed and expanded during the Trakai peninsula adaptation for tourism project in 2010-2012.

Today no religious services are held in the chapel due to the existing exhibition, nevertheless a sacred and artistic spirit has been brought back to this historical and cultural monument. 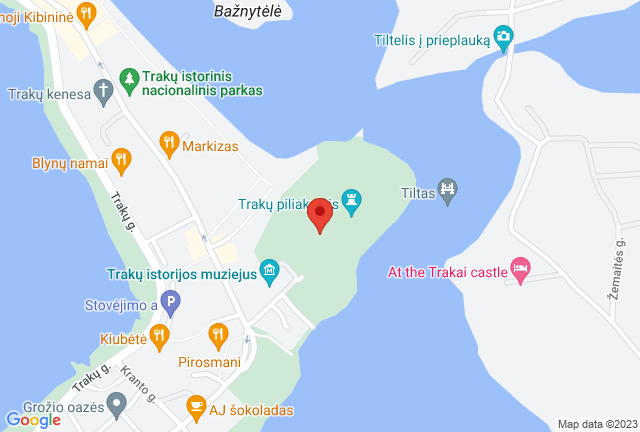