The Geographical Centre of Europe

However, in 1989, a new geographical centre was revealed. Researchers at the French National Geographic Institute determined that the true geographic centre of Europe is located in Lithuania, 26 km North of Vilnius (in the direction of Molėtai), between the villages of Purnuškės and Bernotai. The French scientists used the method of gravity centres in their estimations, which had not been used before in determining the midpoint of the European continent. Their computation was based on the geometrical characteristics of the European continent contours and its ratio to the Earth's gravitation.

In 1997, in order to mark this incredible fact, a giant boulder of 9 tons was placed on the hill in accordance with the determined coordinates:  54°54′N 25°19′E. It marks the geographical midpoint of Europe.

The territory of the Geographical Centre of Europe covers 912 ha providing visitors with an opportunity to admire the beautiful Lithuanian landscape as well as its unique cultural heritage. The territory and its surrounding areas include the following sites:

The information centre is located in a wooden log house at the bottom of the hill. Those who want documented proof of their visit to Europe's Centre can purchase a certificate to testify the fact. The outdoor display of the Centre can be visited in any season at any time of the day. In addition, one of the oldest hill forts in Lithuania is situated nearby, the Hill Fort of Bernotai. The relics found at the site by archaeologists suggest that people settled there in the Istcentury A.D. Another site worth visiting is Sacred Hill, a formerly important place related to religion and mythology.

The Symbol of the European Union

In 2004, to mark Lithuania’s accession to the EU, a monument created by sculptor Gediminas Jokūbonis was placed on the hill. It is a white granite column surmounted by a gold-plated crown of stars. The crown has twelve stars to symbolise the member states of the European Union.

Although a number of European centres were announced in Europe over the past couple of centuries, the geographic centre of Europe, recently determined by the French scientists, is unique. It was computed using a different methodology, which was more specific and never used before. According to the centre of gravity method, the geometrical figure of Europe was taken into account alongside with a number of specific features. In 1989 researchers at the French National Geographic Institute determined that the geographic centre of Europe is located at 54°54′N 25°19′E.

It is important to know that when establishing the coordinates of a particular location the unit of seconds should also be used. Therefore, in 2004, scientists from the same institute have provided more detailed calculations measuring at 54°50’45’’N and 25°18’23”E, i. e. close to Pašiliai Village to the north of Vilnius.

Measurements of the geographical midpoint of Europe are universally recognised and have been included in the Guinness World Records Book.

Only six people live in Bernotai village today, which is located right next to the Geographical Midpoint of Europe. However, the surrounding areas have been inhabited for centuries. The hill fort with parts of a castle, remains of the village and local cemetery, all are testimonies to that.

A hill fort is a naturally-formed hillcontaining a defensive structure located at the top and a cultural layer, i. e. objects that prove former human habitation. There are about 1,000 hill forts around the country! Lithuania is among just a few countries in the world with such an abundance of hill forts. For example, there are at least 7 other hill forts in a 20-km area around the Geographical Centre of Europe (hill forts of Nemenčinė, Piliakiemiai, Dubingiai, etc.).

The Bernotoniai Hill Fort is one of the oldest mounds in Lithuania (around the 1stcentury A.D.). It is an oblong 12-metre high natural hill. It is likely that a defensive castle stood on top of it in the past. The mound is surrounded by Lake Girija, a lake-originated stream valley and a protective grove, which is very common for defensive structures.

Remains of an ancient settlement were discovered to the north of the hill fort. Archaeological research teams found samples of ceramic pots and burnt metal elements testifying to human life in these areas in the 1st–12thcenturies. These findings are kept at the National Museum of Lithuania.

Bernotai is also the site of Sacred Hill. It is one of the most commonly found types of sacred places in Lithuania, a place of cult. Such hilltops were equipped with an altar, where the eternal fire was protected by young virgin priestesses. Such sacred sites have an aura of special respect, and they were usually erected in open places next to other archaeological sites, holly woods or rivers.

The word ‘alka, alkas’ is related to the word ‘alkti (Eng. get hungry). The etymology of this word points to the concept of sacrifice or the idea of ‘feeding the Gods’. Bones of the deceased found nearby testify that these were the places of sacrifice and burial.

Even after the official introduction of Christianity, these sanctuaries remained an important part of Lithuania’s spiritual and religious life. For example, people would go there and ask for good health and a good harvest, leave sacrifices after a mass, child shepherds would imitate ancient rites around such places, and so on. 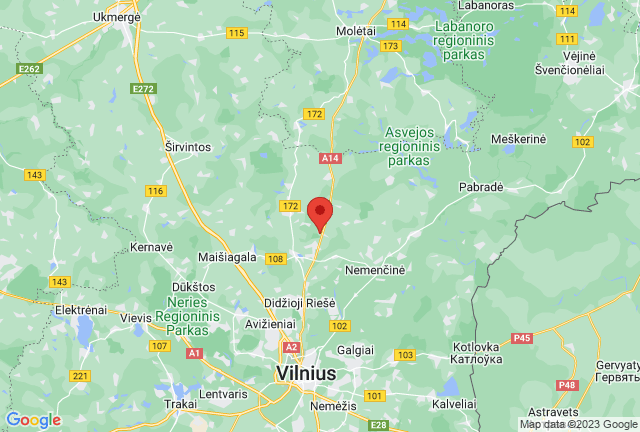