Senieji Trakai Church of the Annunciation and St. Benedict

One can visit Senieji Trakai monastery built back in the era of Vytautas the Great, that is, at the beginning of the 15thcentury! The monastery was founded in the Duke's native castle, whose construction was started by his grandfather, Lithuania's Grand Duke Gediminas. As the story goes, Gediminas, who lived in Kernavė at the time was on a hunting expedition in Senieji Trakai area and became so enamoured with it, that he decided at that moment to build a castle there and to make it the country's capital.

Therefore, before Senieji Trakai Castle became a monastery, it served as the residence for the dukes. Gediminas, Kęstutis with his wife Birutė and their son Vytautas, who was born in this castle lived there. When Kęstutis began building Trakai Island Castle, the defensive and representative role of Senieji Trakai began to diminish.

Duke Vytautas wanted his native castle to be preserved and looked after, therefore soon after he secured Pope Innocent VII‘s blessing, he invited Benedictine monks here in 1405. Vytautas gifted the monks a tenth of his manor's lands, a plot of land with gardens, even two lakes and began construction of a wooden church nearby. Soon after Senieji Trakai parish was established.

Senieji Trakai monastery was rebuilt numerous times, because its wooden construction began to decay and was once even destroyed by fire. A new masonry monastery building was erected in its place in the 18thcentury. But after some time, the monastery was closed, and Benedictine brothers relocated to Nesvizh.

At the end of the 19thcentury, the current Church of the Annunciation and St. Benedict was built on the site of the old monastery. The church with its magnificent architecture has four front façade towers and delights with the solemnity of its neo-gothic style. Visitors can examine the treasure that is kept in the church – gorgeous altars with statues of the saints, easel paintings, liturgical utensils and other art works.

By the beginning of the 15thcentury, Senieji Trakai Castle had lost its defensive role, because Naujieji Trakai Island Castle (today simply called Trakai Island Castle) was already built and gained the status of the primary defensive castle. Thus, Vytautas the Great invited Benedictine brothers from Tyniec, a town not far from Krokow (today territory of Poland) to his native castle.

The monks practiced a contemplative way of life, dedicated a lot of time to prayer, meditation, and other spiritual practices. They taught in the estates they were assigned to. Alongside the abbey, they founded a parish elementary school.

Benedictines were educated, and they paid special attention to education – this is confirmed by the fact that at the end of the 18thcentury there were even 769 books in the monastery's library. According to historical data a book cost 8 gold coins, while some of them cost as much as 30 gold coins.

Senieji Trakai monastery that was given the name of Annunciation is now occupied by the congregation of the Sisters of Saint John. The nuns opened a retreat house in the restored medieval castle and invite believers to participate in Catholic religious recollection and meditation practices. The Sisters also organise other religious events, take care of local youth, and once even housed participants of a bard festival.

Monday are ‘desert’ (retreat) days for the Apostolic Sisters of Saint John. It is a day of total solitude and prayer. The monastery is open on all the other days. Masses are celebrated, and adoration of the Blessed Sacrament takes place.

In the place of the former Benedictine monastery, a neo-gothic style church designed by Apolinaras Mikulskis was built at the end of the 19thcentury. The main façade towers reflect its special elegance and grandeur.

The interior of Senieji Trakai Church of the Annunciation and St. Benedict is lovely but simple and has Benedictine iconography. Visitors can enjoy unique sculptures and paintings in three chapels and nine altars. Several things are especially noteworthy: the St. Augustine and St. Benedict sculptures along with side altars dedicated to St. Benedict and his twin sister St. Scholastica.

In the church's courtyard stands a wayside shrine dedicated to the Blessed Virgin Mary with the Infant in her arms. This is one of the nine wayside shrines, created along the symbolic Vytautas the Great road. A sculpture in the ancient site of Senieji Trakai castle symbolises the purity of motherhood and love for the motherland. Some people point to the parallel between priestess Birutė, holding her son Vytautas in her arms.

The Benedictines were founded in the 6thcentury, and it is the oldest Catholic monk order. The Regula (set of conduct rules for Christian monks) of St. Benedict of Nursia was the start not only of the Benedictines, but also of the monastic tradition of the whole Western Church. Benedictines pay special attention to the search for God in prayer, silence, and solitude. The founder of the order himself spent three years in solitude and serenity in a desert in a mountainous area in the middle of Italy. Everybody knows Saint Benedict’s slogan Ora et labora– ‘Pray and work’.

Benedictine monks, who live according to the Regula and life of the saint, spread the Christian faith and civilisation in Europe. Saint Benedict was declared the patron saint of Europe for his role in creating the Christian identity. 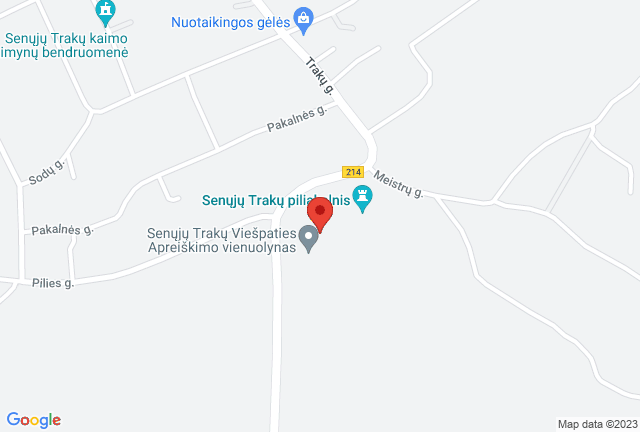