Medininkai settlement is famous thanks to a number of impressive historic-cultural sites. Here you can visit the famous Medininkai Castle and one of the first seven parishes in Lithuania. The then ruler of Lithuania and King of Poland, Władysław II Jagiełło (Lith. Jogaila), established the Medininkai Parish immediately after the Christianisation of Lithuania in 1387. The current Church of The Holy Trinity and St. Casimir was built in 1930, almost half a millennium later. Interestingly, prior to the construction of this Church, several churches and chapels had been built in the Medininkai settlement.

In 1391, at the invitation of Jogaila the representatives of the Order of Saint Augustine arrived in Medininkai. They built a church and a monastery and administered this parish for more than 400 years. In 1831, under pressure from the tsarist government the Augustinians were forced to leave. The Parish was abolished while its territory was divided between the neighbouring parishes leaving the church closed.

Today, the Church of The Holy Trinity and St. Casimir is serviced by different monks, Franciscan brothers (Conventual Franciscans or the Minorites). The first Franciscan brother, Fr. Kamil Wielemanski, settled here in 1961, when he returned from Soviet exile. Right after the re-establishment of Lithuania’s independence, more Franciscan friars from Lithuania and abroad came to reside in the monastery next to the church.

In 1917, a temporary chapel was dedicated in the name of St. Casimir. During the war the chapel was moved by local residents to the village shed as they were unable to finance the reconstruction of the Medininkai Church. In the same year, following a decision of the Vilnius Archdiocese, the Medininkai Parish was restored.

The Church of The Holy Trinity and St. Casimir is a wooden rectangular-style structure. Anton Filipovič-Dubovnik was the architect of the original wooden church. The church stands out thanks to its artistic features including monumental crosses, an 18thcentury organ and a painting of St. Casimir.

The Church was Rebuilt More than Once

There are few written historical sources mentioning the Church of The Holy Trinity and St. Casimir. The information available illustrates the many difficulties it experienced throughout its history.

Since its foundation in 1391 and to the present day, the Church of The Holy Trinity and St. Casimir has been rebuilt twice.The Church was restored for the first time following a fire in 1780. The enemy army marching through Medininkai likely started it. At the time, its pastor held services at a temporary structure made of wood logs. Under the straw covered roof, there were three altars. One of them had a picture of the Virgin Mary painted on a piece of wood. Interestingly, a parish school was already functioning in Medininkai at the time, offering its services to 15 local students.

The 19thcentury brought plenty of hardships for the Medininkai Church and Parish. In 1812, during Napoleon’s invasion of Russia, Medininkai settlement was robbed and burned down. The parsonage, monastery, library and church archives were all lost in the fire. From 1830, the tsarist government of the Russian Empire, which decided to destroy the communities of Catholic monks, decided the fate of the church. Both the Medininkai Church and Monastery were closed, Medininkai Parish was abolished, and its territory was divided between the neighbouring parishes. Medininkai did not have any churches or chapels for half a century.

The second reconstruction of the Church, which took place in the 20thcentury, did not go smoothly either. The Russian authorities had repeatedly rejected the requests of local residents to build a church. Even the passing of the Decree on Religious Tolerance in 1905 did not improve the situation. It was only in 1917 that the German occupation administration provided an opportunity to build a church, and Medininkai Parish was reinstated by a decision of the Vilnius Archdiocese. Although the foundations of the present wooden church were consecrated in 1922, the new Church of The Holy Trinity and St. Casimir was only fully built in 1931, almost a decade later, thanks to the joint efforts of local parishioners.

The Medininkai Church invites visitors to admire its works of art including the organ, two monumental crosses and a canvas painting of St. Casimir. The largest cross is positioned above the western façade tower and closely resembles the proportions of the Latin cross. It is decorated with a variety of floral and geometric openwork ornaments. The smaller cross hangs above the porch of the Church and has the form of the Cross of Malta.

The Cross of Malta is an octagonal-shaped cross. The First Great Master Raymond du Puy approved it as the emblem of the Order of Malta in the 12thcentury. Notably, the knights of this order also took monotheistic vows, i.e. vows of obedience, chastity and poverty. Love, respect, maintenance and promotion of justice, freeing of the oppressed and their protection were among the most important values of this Order of Malta.

The design on the front of the late Baroque-style organ was created in 1788. The décor of the organ is impressive: the pipes are grouped into three towers and two transition areas. The organ is decorated with intricate ornament garlands and flaming acanthus carvings, with wings attached to its sides.

The painting of St. Casimir is a replica of Vincas Slendzinskis’ work. At the beginning of the 20thcentury, painter Liucija Balzukevičiūtė used oil paint to perfectly embody peace and spirituality in this painting. The kneeling St. Casimir holds his hands in prayer, and his figure is emphasised by the contrasting lighting. The colours of the painting’s background are mostly dark, while St. Casimir is portrayed in a decorated red vestment.

Interestingly, St. Casimir is always depicted wearing red vestments. In the iconography, the colour red symbolises the suffering associated with the earthly sufferings of Christ and the blood he spilt for humankind. However, St. Casimir was not a martyr, and the right to wear red garments is granted to him by his royal ancestry. 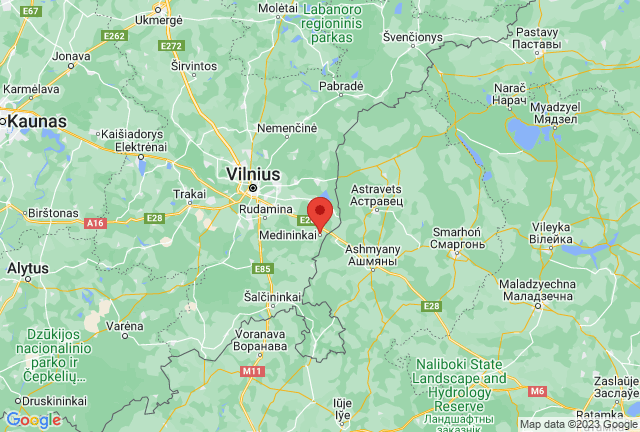