Medininkai town grew alongside one of the oldest and largest trade routes in Lithuania, used by Lithuanians to get to the Russian lands. Burial mounds, hill forts and traces of ancient settlements are often found along this trail and testify to the fact that its history dates back to the first millennium.

Due to the lack of historical and architectural sources, we cannot know precisely when the castle was built in Medininkai. It is believed that the settlement and the castle appeared during the reign of Grand Duke Gediminas of Lithuania in the first half of the 14th century. At the end of the 14th century, Medininkai Castle was mentioned in written sources for the first time. It was a document detailing one of the crusades.

Medininkai Castle located in close proximity to the Aukštojas and Juozapinė Hills, the highest peaks in Lithuania, is one of the best-preserved castles in the country. The oldest elements of stone building were preserved and now help create an atmosphere of the castle’s daily life during medieval peacetime and imagine how our ancestors defended the castle from the attackers.

Medininkai Castle has undergone restoration, and now invites visitors to explore its permanent expositions held in the main tower and to enjoy the view of the Medininkai Highlands from the observation deck. Annual events including Medininkai Castle Games and Music and Rituals Day in Medininkai are held at the castle. Its premises are also used for conferences and visual arts expositions including photography, graphics and painting. Educational activities for children and adults are held at the conference hall and the castle’s courtyard.

Medininkai Castle is rectangular-shaped and classed as an enclosure castle. It is the largest castle of this type in Lithuania and one of the largest castles in Central and Eastern Europe! Double defensive ditches (one of them filled with water) and a wooden wall surround it. Its total area including defensive moats and fences is close to 6.5 hectares.

Medininkai Castle has four towers, which are connected by walls almost 2 metres thick and up to 15 metres tall with gates and embrasures. The main defensive and residential tower (the dungeon) is about 30 metres high. The Castle’s architecture is modest and simple. Although it is difficult to distinguish more prominent style features, the gates and tower windows have sharp arches, which could be considered the rudiments of the Gothic architectural style.

Medininkai Castle is one of the best-preserved castles in Lithuania and has four permanent exhibition halls. The main tower of the castle is five stories tall and invites visitors to learn more about the history of the Grand Duchy of Lithuania and its brick castles and explore unique archaeological findings. The latter include weaponry of the time: cannons, stoneware and other military equipment. One of the halls houses a display of hunting trophies and a collection of hunting knives belonging to former Lithuanian President, Algirdas Mykolas Brazauskas.

The fifth floor has a great hall, which leads visitors to the observation deck of the main tower. It offers beautiful views of the Medininkai Highlands and the two highest hills in Lithuania, Aukštojas and Juozapinė.

Every year on the last weekend of September Medininkai Castle hosts the extraordinary Medininkai Castle Games. During this celebration, the castle seems to come to life bringing together knights, craftsmen, artists and countless guests. The castle is full of hustle and bustle while guests enjoy all sorts of entertainment including games, music and dancing. Knights and archery tournaments are held, and riders have a chance to demonstrate their prowess.

A traditional craft fair takes place in the castle’s courtyard, and dozens of craftsmen display their creations. Assisted by professionals, visitors can create their own crafts or souvenirs. Visitors are welcome to relax and have a drink and a snack in a special pub set up for the occasion.

The event celebrates the castle’s history, its importance in Lithuania’s history as well as key historical figures and legends associated with the castle. The sounds of ancient music, ritual hymns and altar smoke – all create a special medieval atmosphere.

Festive educational classes for children and adults take place in Medininkai Castle. Elementary school students can take part in the class about Ancient Pagan Religion, which talks about the hierarchy and diversity of ancient gods, dukes and the role of ancient priests and priestesses of that time. A different class reveals the aspects of the medieval city's architecture, various clothing peculiarities and specific societal life that existed here hundreds of years ago.

Older schoolchildren can learn more about the history of money in the world and in Lithuania as well as the subtleties of moneymaking. A class about bows and their use held at the Castle’s courtyard will be of interest to both young and old. The art of archery will not be all about theory, as guests will have a chance to try it out in practice.

One can learn a lot at Medininkai Castle not only theoretically, but also use the tools hands-on. This is a truly memorable experience! 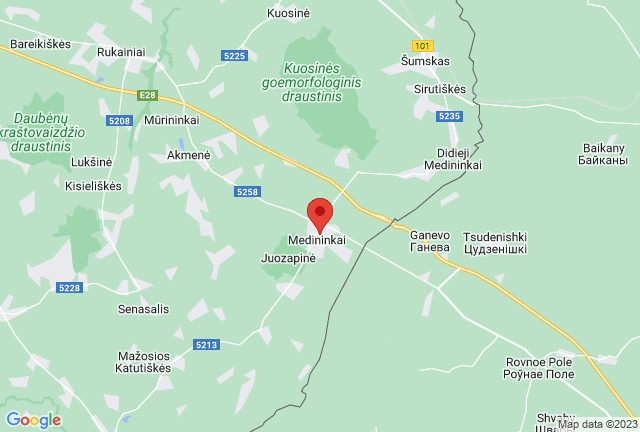