Centre of Traditional Crafts at the Houvalt Manor in Maišiagala

The Centre of Traditional Crafts is situated in a former Manor in the town of Maišiagala, located about 25 km north-west of Vilnius, in the direction of Panevėžys. The centre serves as the main attraction of Maišiagala, bringing together local communities as well as anyone searching for unique experiences. The Houvalt Manor, a classic-style estate located at the foot of the Maišiagala Hill Fort, is recognised as a cultural monument of local significance.

The Centre of Traditional Crafts aims to preserve the traditions, customs and old practices of Vilnius Region. The goal is to ensure that crafts are kept alive by constantly reviving them, making presentations to the visitors to the centre and holding special lessons. Educational activities are aimed at both children and adults. Those who want to get to know the folk art and local culture more closely, can attend special meetings with craftsmen and cultural activists as well as exhibitions and craft fairs selling traditional handicrafts and delicacies.

Houvalt Manor houses not only the Centre of Traditional Crafts, but also Maišiagala Cultural Centre, City Library, Community House, a local concert hall and a souvenir shop for visitors. Additionally, a modern conference room is available for rent.

The Centre of Traditional Crafts offers its premises to local traditional craftsmen enabling them to create, showcase and sell their creations as well as provide open lessons of their craft. The centre has a developed technical craft base and specifically equipped workshop facilities. Hopefully, it will help unite local craftsmen and establish collaborations with various craftsmen abroad. The centre provides assistance in obtaining a craftsman’s certificate.

In the Centre of Traditional Crafts, folk artists and local folklore scholars offer visitors various educational activities. More than ten different crafts professionals help children and adults get to know various useful crafts and discover their intricacies. A team of experts consisting of a woodcarver, a paper cutting expert, a soap maker and a carpenter willingly share their knowledge in the field of their crafts. You are also invited to learn about candle making, straw weaving, wool felting and ceramic craftsmanship. Everyone is welcome to learn the art of Lithuanian palm weaving, practised exclusively in the Vilnius Region, or learn more about traditional holiday dishes or regional customs.

Maišiagala was first mentioned in written sources in 1254. From the 14th century, this territory belonged to the rulers of Lithuania, and a few centuries later its ownership was passed to the Lithuanian nobility.

Today, the Maišiagala community consists of about 1,800 people, and it actively fosters ancient traditions and regional culture. In order to preserve and pass on the historical-cultural heritage of the land to future generations, joint efforts of the Maišiagala community and the Vilnius District Municipality have received support from the European Union Structural Funds. This enabled them to restore the Houvalt Manor and adapt it for public needs.

The refurbishment of Houvalt Manor was completed in 2016, and today it is the cultural centrepiece of Maišiagala. The place is full of various activities and entertainment. Locals can enjoy different events and celebrations. Maišiagala art groups now have a new space for rehearsals and concerts, which is available all year long. During national holiday celebrations, vocal and traditional Lithuanian dance groups foster local folklore heritage. Every summer the annual celebration of the Day of Maišiagala is held and this has become a unique tradition.

Maišiagala community implements many interesting projects. One of them is the establishment of Maišiagala’s Housewives Club. Local housewives have documented their culinary experience and secrets by publishing a paper and ebook version of their cookbook.

Historical sources indicate that people settled in the surroundings of Maišiagala at the times of the Lithuanian Grand Duke Algirdas, about a hundred years prior to the first settlements in the capital of Lithuania, Vilnius. It was there that Algirdas died in 1377. For a long time the territory belonged to the rulers of Lithuania. Later the territory was in the ownership of the noble Sapiega family, and later the Tyzenhauz family became the landowners. The Noble Houvalt family owned the estate from the end of the 18th century until the start of World War II.

In about 1806, Count Onufry Houvalt initiated the construction of a classical-style manor. It was designed by Mychal Angel Shulz, a famous architect of the time and professor at Vilnius University. Unfortunately, following his death, his idea was only partially implemented. The construction of the manor was completed by Onufry’s grandson, Vitold Houvalt, at the end of the 19th century.

Following World War II, Houvalt Manor was used for many purposes. During the war, locals found shelter there, and later, when the political system was changed, Houvalt Manor hired hands had to become collective farmers and resided at the Manor. It then became a collective farm office and following the restoration of Lithuania’s independence it served as a secondary school named after Grand Duke Algirdas.

When the school was relocated, Houvalt Manor took on a socio-cultural role. Part of the premises were given to the city library, and this is the place for local amateur music companies and local community meetings. Today, Houvalt Manor (more than 200-years old) proudly cultivates cultural, artistic and national heritage. 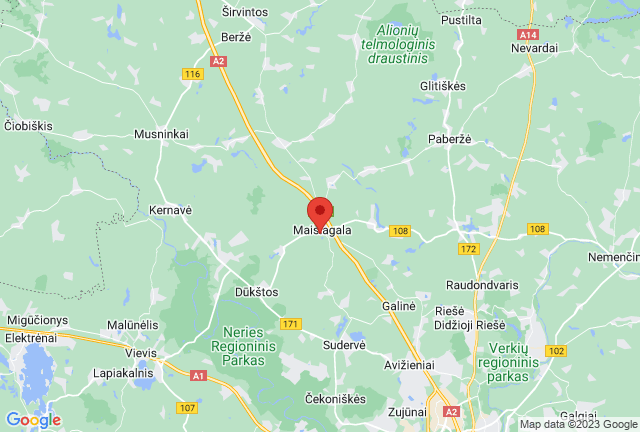